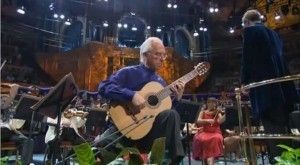 Concierto de Aranjuez is the best known work of Joaquín Rodrigo, a great Spanish composer of the 1900s. It is one of the most beautiful concerts for guitar and orchestra, which in truth are not many, because playing against an orchestra is not easy for a classical guitar. But in this concert guitar is never obscured by the orchestra, thanks to the clever use of orchestration by Rodrigo. There are three movements, the first very rhythmic and pressing, and the third with a time very free. But probably the second movement is the one that has caught more in the sign, with this melody really touching, which was taken up by many artists, among them such as Miles Davis. I prefer the version of John William, but it is also interesting Paco de Lucia.

by Wenz
Guitarist and Composer