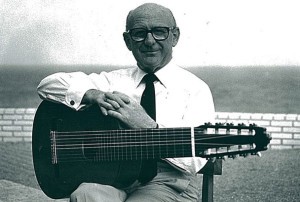 The legendary Narciso Yepes performs an 80 minute solo recital, plus 25 minutes of encores, on the ten-string guitar of his own conception, at the Teatro Real de Madrid, in 1979. This is without electronic amplification of the guitar, as Yepes always insisted, but with his improved sitting position and revolutionary right hand technique, which, together with his 10-string guitar’s sympathetic resonance, optimize tone quality and projection. (The microphone seen is for the video’s audio recording only, not for amplification.)

As one reviewer wrote about another recital:

‘Guitar concerts in Carnegie Hall can be a frustrating affair. Narciso Yepes brought his 10-string invention there last Thursday, and suddenly it was not a problem hearing that instrument in that space.
‘His guitar fills the hall with sound. The musician who plucks it is one of the finest in the world today. The second half of the program was devoted entirely to 20th-century works, an intriguing survey of music – for an apparently limited instrument – that was at once engrossing yet challenging. Of greatest interest were Eduardo Sainz de la Maza’s ”Laberinto,” with its jazzy undercurrent, and Leonardo Balada’s supremely virtuosic, exciting ”Analogias.”
‘Mr. Yepes, who appears to be not much larger than his oversize instrument, is a selfless musician, putting the music before his personality in what could serve as the ideal of any performing artist but so rarely is. One left his recital stimulated and elated, with nary a thought as to the potential limitations of the instrument, dynamically or musically.’