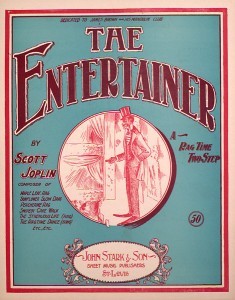 “The Entertainer” is one of the most popular songs of Scott Joplin and is probably the best known piano rag. More notoriety came from the movie “The Sting” in 1973, where the composer pianist Marvin Hamlisch used Joplin’s music for the soundtrack and winning Hollywood Oscar. Although the original version was for piano, is “The Entertainer” is a song very well played by guitarists, for example, is also great on the classical guitar.

If you like blues and black music played with classical guitar, let me also suggest you “Delicate Blues“, a composition of mine. Thank you.