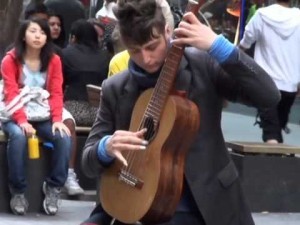 This is an interesting phenomenon of talented guitarists who found fame playing as street performers, although they are not. So after Estas Tonne, now is Tom Ward, who got visibility with its classical guitar in the street performance. Tom Ward is an Australian guitarist graduated from from ANU under Timothy Kain, which has received numerous awards and recognitions. We see in these videos play a mix of famous themes of classical guitar, flamenco pop and joining techniques of improvisation and flamenco guitar. He plays an amplified guitar with a wide neck and microtonal intonation, probably he did settle the soundboard to achieve a worn effect “street”. However, what comes out is an interesting visual effect similar to that of Estas Tonne, for those who like …
—

What are the best CDs of classical guitar?
The best guitarist in the world