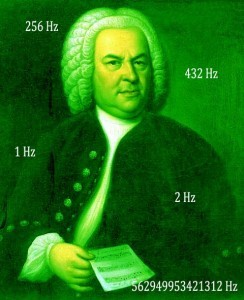 Now there is talk everywhere of music at 432 Hz and its beneficial properties. But are all the same music tuned to 432 Hz?

Tuning at 432 Hz it is much debated on the internet if you search this topic you will find everything and more. Perhaps you wonder if the music to 432 Hz is all equally beneficial? By now, after years that I write and I’ll take care I think I have some experience to tell you that the music at 432 Hz is not all the same.

I have explained that to be truly music to 432 Hz, it is necessary not only that the A note is tuned to 432 Hz, but also that the C note is to 256 Hz, which is achieved only with special tunings such as the Pythagorean or Ptolemy. So let’s say that a song recorded at 432 Hz with a tempered scale (the one usually used in Western music) is not the same thing as a piece in which the frequencies are all set on a Pythagorean scale, where all notes reflect the 8 Hz Mathematics. In addition I say that a song recorded at 440 Hz and then converted to 432 Hz, is less effective than one registered immediately at 432 Hz.

Tempo and Tonality
Since the Pythagorean tuning changes depending on the tones, even the choice of the music tone is important, so a song in A-flat major to 432 Hz is not the same thing as a piece in C major to 432 Hz. It must also be considered tempo of the song. This also affects, as it is measured in beats per minute, and the notes will be proportional to the chosen time. Since the minute is a fraction of the solar day, that is in function to the Earth’s rotation, the time has its importance and is in relation with the frequency because the frequency of a sound is composed of vibrations per second.

Do not Forget the Composition
The composition is never considered, perhaps because it is thought that as long as the music is nice and everything is fine, that on the one hand it is also true, and there are studies that prove it. But consider for a moment that the composition with the Pythagorean scale was an ancient Greek modal composition, with special properties. What is the maximum point of perfection of this way of composing?

You may not know, but the highest point of the ancient polyphony comes at a time not far from now, and he who has attained the highest degree of perfection in the ancient style is Bach.